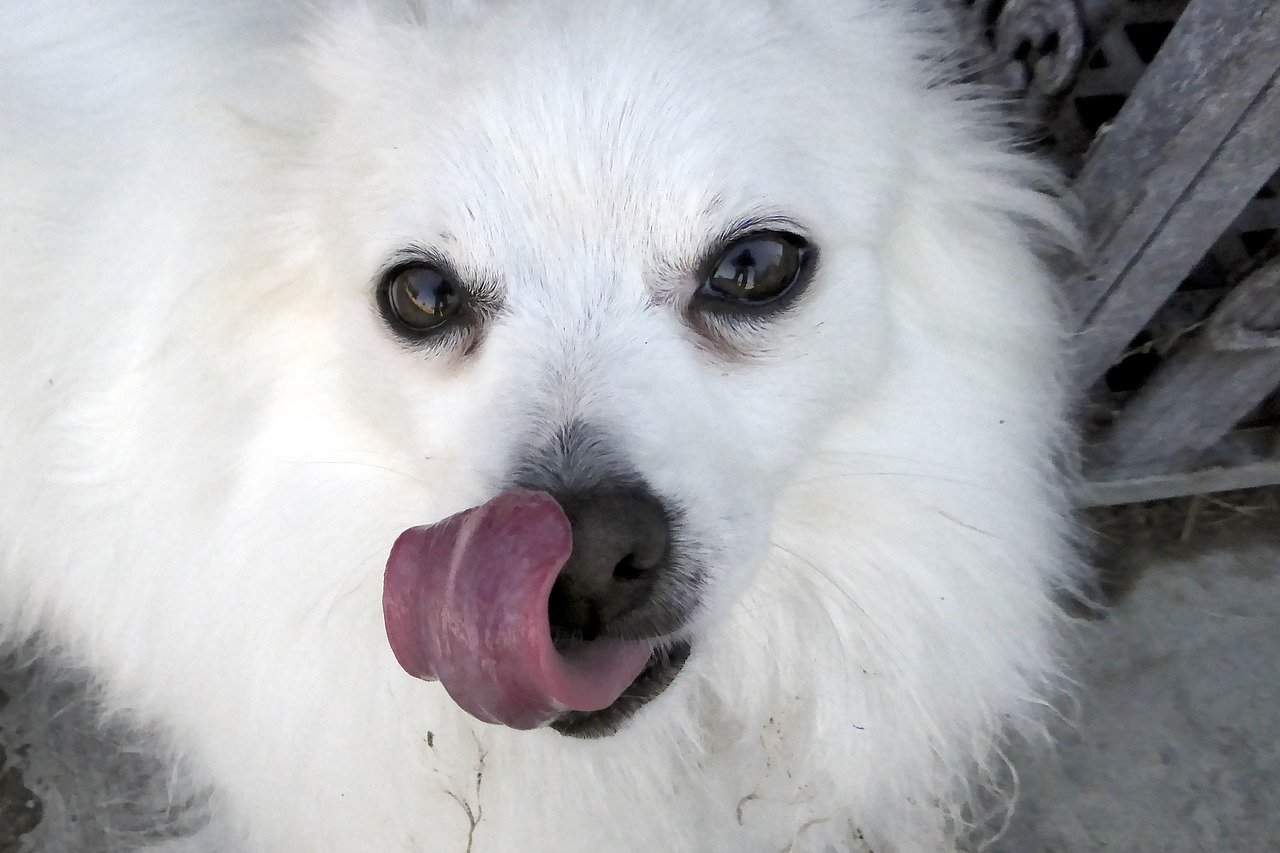 If you’ve been asking yourself, Why is my dog licking my baby’s ears? here are some answers:

Mayday, Mayday, Odd Dog Behavior — Why Is My Dog Licking My Baby’s Ears?

Over the years, I have come to the conclusion that my dog is simply weird. So when I asked myself, Why is my dog licking my baby’s ears?, I was looking to place that in the “weird behavior” category and call it a day. Of course, I soon realized that, although weird, my dog definitely isn’t the only one that’s trying to lick new family members.

Now, there’s a good reason I thought that licking the baby’s ears was super-specific to my dog. We’re talking about a dog that refuses to eat on the floor. His Doggo Majesty insists on being fed while sitting at the table. What’s more, he likes it when I sit with him. He loves family meals, what can I say?

That’s just one example of his weird quirks that I, as an overeager first-time dog owner, allowed to develop over the years. Yes, I know that I should have trained him to be a normal dog. However, , and it was cute (until it wasn’t). And, over the years, my dog started developing more eccentricities.

When the baby came, he was so excited. He was eager to please and meet the newest member even during pregnancy. And when we brought our baby girl home, he was ecstatic. He slept in her room, followed us around the house, and used every chance to interact with the baby.

Then came the ear licking. Naturally, I was a bit worried — but quite intrigued too. So, I started researching to see what prompts this behavior in dogs. 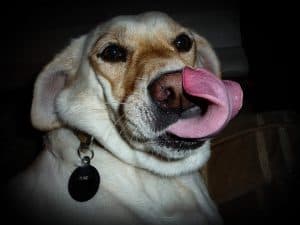 Why Is My Dog Licking My Baby’s Ears?

My research shows that there are a few reasons that a dog would lick the baby’s face and ears. Being the loveable doofuses they are, dogs lick ears to show their affection and acceptance. It’s as adorable as it is disturbing. But what does that exactly mean?

It’s How They Explore

One of the answers to the question Why is my dog licking my baby’s ears? is that the dog is trying to get to know the baby. As soon as the baby comes, the dog will likely not only sniff it but also lick it to see what this bundle of joy actually is. After all, the baby is something new and exciting in its little world. It’s only logical that it will use all its senses to examine it.

We might not be aware of it, but our ear wax has a specific smell to dogs. It’s something they don’t get to sniff or lick that often. Therefore, we can’t blame them for taking their chances when an opportunity arises.

It seems that a baby’s ears are even more enticing, probably because babies smell divine both to humans and dogs. What’s more, babies are the newest addition to the family, which, , warrants a detailed check.

It’s How They Show Affection

One of the most definite answers to the question Why is my dog licking my baby’s ears? is love. Dogs show affection in similar ways humans do.

Sure, our human friends might not lick our ears, but they will hug, kiss, or even nuzzle us. Dogs love nothing more than to snuggle their human companions. They’ll lick our faces and hands, nip at our fingers, and generally try to be as close to us as possible because they love us.

So, ear licking is just another way to show affection. It’s actually a good sign if our dogs start licking the newest family members. That means they love them just as much as we do. More importantly, it indicates that they don’t perceive babies as threats.

Introducing our dogs to our brand new babies can be nerve-racking, though. We can never know how the dog (the baby of the family) will react and if it will be jealous or resentful of the baby.

That was a big concern of mine, even though my dog showed great interest in the baby even before she was born. He’s somewhat spoiled, so I knew that we would have to work on some of his behavior once the baby arrives.

Therefore, I was quite relieved when my furry friend came immediately to the baby’s side and tried licking her face and ears. 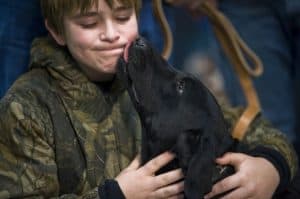 All of us wondering, Hey, why is my dog licking my baby’s ears? can rest easy. It’s not only a sign of affection but also of devotion. When our dogs lick our baby’s face and ears, it’s their way of accepting them into the “pack.” This is especially true for more submissive dogs that look at their owners as absolute pack alphas.

Licking and sniffing is also a way for dogs to bond with humans and other animals. By licking your baby, the dog is trying to get familiar with the newest addition to the pack and to signal to the rest of the pack, “Yup, this is ours now.”

They Are Helping With the Grooming

Licking the baby’s ears might also be an evolutionary trait.

A long time ago, when dogs weren’t as domesticated as they are today, and when they were closer in behavior to their wolf cousins, they would groom other members of their family. Because they can’t really reach their own ears to lick and groom them, and they can’t use the trusty cat technique either (paw licking), they would groom each other’s ears.

So, when our dogs try to lick ours and our babies’ ears, they are essentially helping their pack members. Whether it’s grooming or just a sign of affection, ear licking is the dog’s way of showing that the human is a part of its pack. 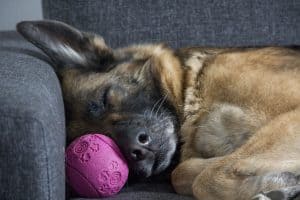 Of course, not every potential cause of ear licking is as cute and adorable as the ones I previously mentioned. That’s especially true if the ear licking starts suddenly.

Dogs that aren’t that interested in nuzzling the baby’s head (and ears) but start licking them all of a sudden might be trying to signal that something is wrong. For example, the baby might have an ear infection. Of course, we can’t exactly use dogs as canine infection detectors. However, if the licking suddenly starts, it should at least give us pause.

Kids have sensitive ears, and babies are especially prone to ear infections. Sometimes, these pesky infections don’t display intense symptoms, so we might miss them. But if we do, there’s a good chance our dogs won’t.

When there’s an infection in the ear canal (or anywhere else), the natural smell changes drastically. We probably don’t notice that, but our furry friends have a much more powerful sense of smell than we do. This, paired with the fact that dogs are naturally curious, means they will probably feel the need to investigate. And what better way to do that than by sniffing and licking the suspicious spot?

While asking ourselves, Why is my dog licking my baby’s ears? we should also consider whether we ought to allow this behavior or not.

Although adorable or even useful, ear licking isn’t something we should encourage. Our dogs have a massive amount of bacteria in their mouths, which can potentially be dangerous for babies. What’s more, by continually licking the baby’s ears, they are making the environment moist (or at least moister than usual). Thus, they are creating the perfect bacteria breeding ground.

In the end, although this is most likely a sign of our dogs accepting and loving our babies, we should be careful. When my pup first started licking my baby’s ears, I was worried about potential repercussions and had to work hard to make him stop. If you’re experiencing a similar issue, I suggest distracting the dog with some treats and using the “No” command every time you see it do it. It worked like a charm for me! 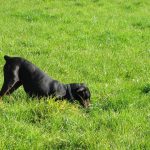 How to Stop a Dog From Digging for Moles. Use This Method

The Battle of the Pets — Why Does My Dog Nibble My Other Dog? 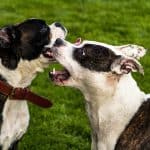