My Dog Kicks Back Legs When Excited — Should I Do Something About It?

What does it mean if a dog kicks back legs when excited? Well, he’s probably happy you’re bringing him food, taking him on a walk, or he just missed you.

Over the years, I’ve noticed that my dog kicks back legs when excited, and at first, I thought nothing of it. But then I realized that he does it in the strangest moments, and I started getting worried. Was he okay? Did my pooch want me to help him, or was he trying to tell me something?

Well, after doing extensive research, I finally have the answer to this age-old question. I now know what the leg kicking is all about it! Don’t worry — the reasons are more adorable than you think.

My Dog Kicks Back Legs When Excited — Explained

When a dog kicks back legs when excited, he or she is trying to convey a message. And as with most dog messages, this one’s pretty simple: Whatever you’re doing is making me really happy, do it some more!

Kicking the back legs is usually the equivalent of happy tippy taps, only even more energetic. And if you’re not familiar with tippy taps, you really should watch this entire thread. Trust me; it’ll make your day.

Anyway, getting back to the matter at hand (or paw) here, your dog will usually start kicking his back legs in a few distinct scenarios. Let’s take a look at what they are.

It’s no secret that almost all dogs love going on walks, as well as spending some quality time with their humans. So when it’s time for a walk, they get super excited and show it in countless different ways. Some dogs will wag their tails, , and others will start kicking their back legs.

Essentially, as soon as Fido sees that you’re getting the leash or collar out, he’ll know what time it is. And one of the ways he’ll let you know how much he loves when you take him for a walk is by kicking his hind legs.

If your dog kicks back legs when excited, and it’s not the time for a walk, . I noticed this behavior every time I pulled out my dog’s favorite tennis ball and showed it to him. He would see it, and a moment later he’d start kicking his back legs, jumping, and wagging his tail. Naturally, I had to throw the ball, and we played fetch until he got exhausted (which is no easy feat).

Of course, not all dogs are crazy about tennis balls, . So, for example, , he might start kicking whenever he sees that rope coming out. That behavior is a positive thing and a way for your pooch to express emotions. And as a bonus, he’ll probably get tired much quicker.

The fact that our dogs get excited about food really isn’t a shocker. They love to munch, and they really seem to enjoy letting you know just how happy food is making them. With that said, a dog can, and will, show his enthusiasm in all sorts of different ways. He might jump, drool, or, of course, start kicking his back legs.

Even though my dog doesn’t kick when I’m giving him food, my friend’s dog does. In fact, a long time ago, we decided to take our dogs for a walk, and I brought his dog a treat. That cute girl was so happy that she started kicking and jumping. It would have been hilarious had we not been standing in mud when she started doing air kicks. Actually, who am I kidding? It was still so funny.

But if you’re feeding your dog indoors, and are afraid that he might knock something over, clear the area. Make sure there’s nothing behind your pooch that he might accidentally break.

Possibly one of the cutest and sweetest reasons a dog kicks back legs when excited is because he’s happy to see you. It usually doesn’t even matter how long you’ve been away, as long as you’re back now.

In fact, my dog does this even when I go to the store without him, and I’m gone for maybe an hour. But he also kicks his legs back when I’ve been on a trip for a week. , he greets me with happy jumps and his legs up in the air. Sometimes, he also throws in a couple of woofs just for good measure.

There’s nothing much more to it, and I personally don’t think that it’s a behavior that you should train out. Instead, just embrace all of the kicks, tail wags, and smooches you can.

Sometimes, when your pooch is really tired, he’ll let you know that it’s time for you to take him to bed by kicking his legs. I know that it sounds a bit weird, but this is especially true for dogs that are extremely attached to their owners.

On occasion (or always), . So they’ll start kicking to tell you that it’s time for you to take them to bed.

But if you’re already in bed, and your dog starts flailing his hind legs, he’s asking for permission to join you. If you have a smaller breed, that’s usually code for Pick me up, human, I can’t climb that high. However, if you have a bigger dog that likes to kick before bedtime, he’s just asking for the all-clear signal.

Even if you’ve never had cats, you’ve probably seen that they start kicking their legs when they finish doing their business in the litter box. They do that to try and hide their scent from predators. Dogs do the exact same thing, but for completely different reasons.

It’s actually because they’re trying to kick up their scent that other dogs can easily sniff out. Usually, the reason behind this behavior is that they’re trying to send a message. They might be telling their fellow-dogs that there’s a threat nearby or something to look out for.

But more often than that, they’re just trying to tell other dogs Hey, dude, I was here before you. , , other dogs can get a whiff of something else.

Should I Do Something About This Behavior?

As you can tell from the scenarios listed above, all of the reasons your dog might be kicking his back legs are kind of adorable. He’s trying to tell you how much he loves you or loves what you’re doing for him.

, your dog is exhibiting pretty normal behavior. What’s more, even if he barks or wags his tail while kicking, it doesn’t mean there’s something wrong with him. .

With that said, a dog knocking over things around your home just because he’s excited is kind of annoying. If you do want to get your pooch to stop, you have to teach him how to be more patient.

One of the easiest ways to do that is by helping him learn how to sit. So the next time you’re bringing food over, get your dog to sit first, and then give him food. Over time, he’ll most likely stop kicking, and just sit when he sees you approaching.

Final Thoughts on Why My Dog Kicks Back Legs When Excited

I’ve always wanted to figure out why my dog was kicking the air. I was worried that there might be something wrong with him and that we need to see the vet right away. But once I put together all of the pieces of the puzzle, it was definitely a weight off my shoulders.

Now I know that the fact that my dog kicks back legs when excited is a good thing. Even though it’s sometimes a nuisance (especially when he finds his ball that I so expertly hid), it’s still pretty fun. And honestly, I wouldn’t change a thing. 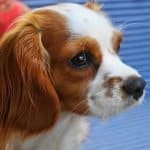 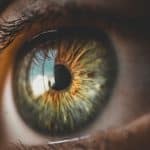