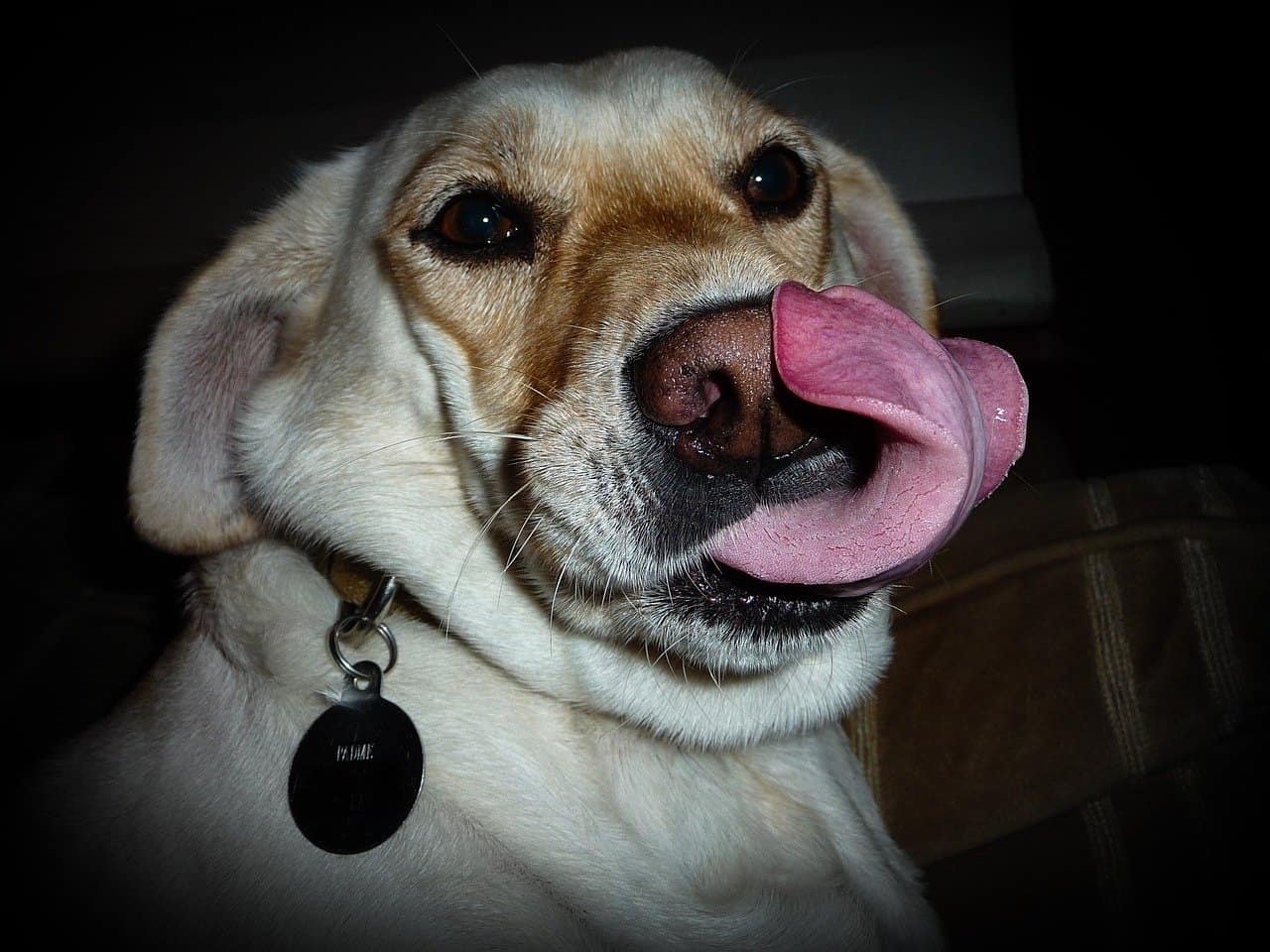 The question of Why does my dog’s tongue stick out when sleeping? is definitely one that has left many dog owners scratching their heads. Luckily, the issue at hand isn’t an issue at all. It’s perfectly normal for dogs to stick their tongues out when they’re asleep. Most of the time, they do it because:

The Hanging Tongue Syndrome might be the cause only if the dog has the tongue out at all times and not when it’s merely relaxing or snoozing on the sofa. Contrary to other potential causes, this condition may require vet attention and suitable treatment and/or management.

Dogs, both young and old alike, tend to sometimes surprise us with their behavior and even alarm us if it’s something we’ve never witnessed before. If you’ve been wondering Why does my dog’s tongue stick out when sleeping? then you probably feel as if this might be a symptom of some underlying issue.

Granted, it might seem a bit strange” href=”https://www.happyfitdog.com/my-dog-is-acting-strange-and-hiding-a-unique-and-helpful-guide/”>strange to see your dog with its tongue out while lying unconscious on the bed. It’s not a pleasant sight, and it might make your heart jump a bit, fearing the worst. That’s how it was for me at first. When my then five-year-old dog started sleeping on her back with her tongue fully out at night, my first thought was to start screaming for help. However, she was peaceful and breathing deeply, which did reassure me she was fast asleep.

Fortunately, I’m here to dispel any and all fears you may have regarding your pup’s habits. As it turns out, there are three major reasons a dog’s tongue may stick out while it’s sleeping. Except for one of them, the habit is not only totally harmless but, in fact, encouraged!

Why Does My Dog’s Tongue Stick Out When Sleeping? Common Causes

The reason I first asked myself Why does my dog’s tongue stick out when sleeping? is rather simple: my dog didn’t make it a habit until just a few years ago. And frankly, yes, when I first saw that tongue all loose outside its mouth, I thought it looked rather…insidious.

However, the Why does my dog’s tongue stick out when sleeping conundrum really shouldn’t worry you. Yes, it looks both funny and alarming at the same time, and that’s probably because we don’t imagine ourselves ever sleeping with our tongues out. Nevertheless, unless we’re talking about the Hanging Tongue Syndrome, there’s nothing to worry about. Your dog’s tongue hangs out while it’s sleeping because:

We’ve all seen those cute animal videos where dogs are fast asleep on a couch or a sofa and have their tongues out. As it turns out, this habit only shows that they’re really relaxed and enjoying their time snoozing away.

Obviously, there’s nothing to agonize about here, especially if you’ve been worried that your dog hasn’t been the happiest lately. Pups often stick out their tongues when they are in a state of pure bliss and if they have an under- or an overbite. For some of them, that state only occurs when they’re safely tucked in next to their owner or sleeping in their doggy beds.

Should you do anything about this, though? Well, there really is no reason to try to stick the tongue back in. In fact, I’d recommend not even trying it, as the dog may wake up and get startled. You are intruding, so to speak, into its personal space, and you happen to be doing it while it’s in its most vulnerable state, i.e., when it’s asleep. Therefore, if you see that tongue out, just let it be — it’s not doing any harm!

It’s Trying to Control Its Temperature

Now, if it’s particularly hot where you live, your dog might stick out its tongue when it’s sleeping because it’s trying to cool down. We often see this when dogs are playing and jumping around. At some point, they overheat and start panting a lot, sticking their tongues out in the process.

A dog’s tongue is full of blood vessels, and when the pup is feeling too warm for its liking, it will stick it out to try to cool down. Unlike humans, which will sweat to release heat, dogs will salivate to get rid of any excess warmth. The saliva on the tongue then evaporates, cooling down this organ along the way. Thus, heat gets out of the body, and the dog stays cool.

Sometimes, dogs will have their tongues out completely, or they may only show the tip through their mouths. Both versions should help them release some of the heat while they’re relaxing or sleeping.

It Cannot Keep It Back (The Hanging Tongue Syndrome)

You may have already heard of the Hanging Tongue Syndrome. In fact, you’ve definitely seen it in some Bulldogs, King Charles Spaniels, and even Chihuahuas.

In a nutshell, if a dog suffers from this syndrome, it cannot physically retract its tongue back into its mouth. Thus, the tongue hangs out permanently, which may pose a threat to the dog’s overall well-being. Over time, it could dry out and crack, as well as become rather sore.

Now, the good news here is that if your pup only lets its tongue stick out when it’s sleeping, it doesn’t suffer from this syndrome. The keyword here is permanent; no matter what they’re doing, dogs with this syndrome cannot bring back their tongues into their mouths.

Usually, an injury or an illness precedes this condition. Falls and different impacts may be at fault here. Otherwise, some neurological conditions may trigger it, too, especially those that happen due to tongue nerve damage.

Unfortunately, you can often only manage this condition, though there are some corrections and treatments available for certain cases. For instance, if the dog has an unusually large tongue that prevents it from eating, drinking water, and sleeping well, the vet may suggest a surgical resection. If the canine cannot control its tongue at all (due to paralysis, for example), it may suggest that it eats only soft, easy-to-swallow food to avoid further damage.

In general, though, the tongue has to be lubricated often so as not to dry out and crack. Most dog owners use olive oil for this.

Since the tongue is often exposed, you also have to be careful about sunburn and frostbite. It’s best to lower any exposure to both extremely high and low temperatures.

And there you go — the Why does my dog’s tongue stick out when sleeping conundrum isn’t really alarming at all. Unless the dog has its tongue out all day long and not just when it’s snoozing, it might just be trying to cool down a bit or is rather at ease with its surroundings.

In the end, keep in mind that there’s hardly any reason for concern if the dog doesn’t display any other symptoms, such as improper elimination, strange behavior, pica or coprophagia, etc. And if the syndrome is the issue, you’ll notice quickly enough that the tongue is out at all times — not just when the pup is all cozied up in the bed! 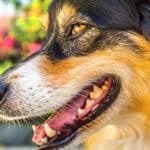 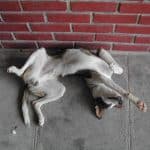