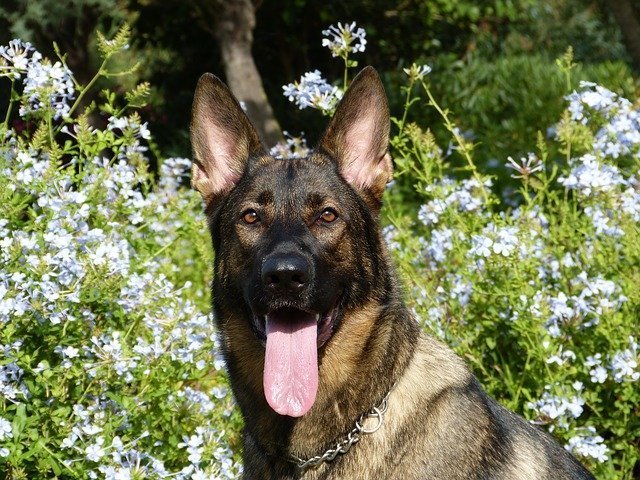 When I first noticed pacing back and forth in my older dog, I was understandably concerned. Soon enough, I discovered that this kind of compulsive movement can be caused by anything from restlessness and anxiety to medical issues like arthritis or cognitive dysfunction.

Cognitive dysfunction can be particularly worrying when you realize that pacing isn’t the only symptom a senile dog can exhibit. However, while CD may be a scary diagnosis, there are many things you can do to help your dog bounce back as much as possible.

Pacing Back And Forth In My Older Dog

The thought of my dog growing older is enough to terrify me and put me off from ever having another one. The feeling doesn’t last for long, only until I remember the hundreds of thousands of other pups that are just waiting for their forever homes. Still, seeing pacing back and forth in my older dog can definitely be a frightening foreshadowing of things to come. So what can dog owners do to educate and prepare ourselves for the inevitable?

Well, to begin with, we shouldn’t rush to these kinds of conclusions. Several things can make a dog get up and start pacing. What’s more, not all of them are connected to old age. So let’s take a moment to go through the potential reasons an older dog might have for the increased restlessness.

Possible Reasons for Pacing Back and Forth In My Older Dog

Since I’m actively trying not to be anxious” href=”https://www.happyfitdog.com/dog-suddenly-anxious-at-night-common-causes-and-solutions/”>anxious about what’s causing pacing back and forth in my older dog, I thought we should start our list with the more harmless potential reasons. However, if you want to know the worst-case scenario, I’ll make sure to explain how to proceed if your mutt receives that diagnosis later on.

Without taking age into account, one of the most common reasons dogs pace around is plain old hyperactivity. That state of mind tends to also emphasize and heighten any new sensations, which is why some dogs will start pacing when they smell another animal nearby.

If your dog has ever caught a whiff of an animal before seeing it, you’ve probably seen it happen first-hand. After all, canine behavior completely shifts after they make that visual contact. If the animal they’ve sniffed out was a squirrel or an antagonistic dog, they’ll become preternaturally still and stiff. Alternatively, if it’s a dog they like, they may become excited and jump around or dash away to meet it.

Generally, hyperactive behaviors don’t just come out of nowhere. They usually happen to dogs that are naturally more athletic, but not getting the exercise they need. Old dogs could still have enough energy to spend on pacing because it’s not getting enough exercise. Therefore, we should first try spending more time walking and playing with our beloved mutts.

Even though most older dogs don’t have much of a libido, that may not be the case for all of them. When I noticed pacing back and forth in my older dog, that certainly wasn’t the first explanation I thought of.

However, upon further investigation, I found out that another neighborhood dog was in heat. But that wasn’t what made me believe my dog might have taken notice. I’d also heard that an older male stray had tried to run at her — and I knew he wasn’t much younger than my own mutt. So that proved to me that it’s possible that an older dog would start pacing due to an unfulfilled mating urge.

Anxiety can be another huge reason a dog might start pacing back and forth, no matter how old it is. The repetitive action may be a way to calm its mind and engage its body. Humans pretty much do the same thing, so it should be easy to recognize when our dogs are doing it. And if we have determined that anxiety is, indeed, the cause of the pacing, we should also be able to alleviate it.

If we’re dealing with temporary feelings of nervousness, it should be enough to spend some time with the dog in question and make it feel comfortable. In a way, that’s exactly why dogs take to pacing.

On the other hand, if the state of panic is recurring, you’ll need to get to the root of it. Is your dog worried about you leaving? Does it have trauma you need to address? If a dog is anxious because of past trauma, your vet might even recommend anti-anxiety medication.

Some older dogs also start pacing to deal with other problems, namely, arthritis. Constant movement can often alleviate the discomfort and pain. Therefore, the pacing may be the only way for the dog to feel comfortable.

If you suspect the pain is the underlying drive behind the compulsive movement, have your vet perform some tests. They might find that the source of the pain is treatable through medication.

When I first noticed pacing back and forth in my older dog, my mind immediately went to the worst-case scenario. What if my dog is compelled to keep walking because it keeps forgetting where it was going. Could dogs become senile?

As it turns out, walking back and forth is often one of the first symptoms of canine Alzheimer’s or dementia — otherwise known as cognitive dysfunction. The reason we draw comparisons between some human conditions and canine cognitive dysfunction is that they all seem to have something to do with growing deposits of beta-amyloid in the brain.

Because we can’t talk to our pets no matter how much we all try, veterinarians don’t really have a clear idea of why these kinds of conditions develop. All we know is that CD affects over forty percent of dogs older than eleven. What’s more, that number rises to over eighty for dogs older than fifteen. What’s more, other than the restless pacing, symptoms may include:

But even though these symptoms are nothing to scoff at, the situation isn’t completely hopeless.

As we have established, after a certain age, symptoms of CD are pretty much unavoidable. Still, before we jump to conclusions, we should consult with professionals. In any case, early intervention may well be the key to slowing the progressive degeneration. So the first step should be taking our beloved dogs to the vet.

Go to the Vet As Soon As You Notice Symptoms

A veterinarian might diagnose a senile dog by using one of several methods. Firstly, they might inquire about the dog’s symptoms while they perform the physical exam. They might do an X-ray (i.e., radiograph) to look for arthritis or suspicious growths or evaluate your dog’s kidney function by doing a urine culture test. Blood tests are also done to evaluate the overall health of the dog.

However, if a vet suspects CD, they might refer your dog to a neurologist to check if it has brain tumors before confirming the diagnosis.

Sadly, canine cognitive dysfunction isn’t a condition we can cure. However, there are some things you can do to help your dog through it and alleviate its anxiety. Just think about it: wouldn’t you be scared if you kept forgetting where you were and walking aimlessly?

Still, if older people can do their crossword puzzles to maintain their mental agility, there has to be a similar exercise a dog could do. Try giving your dog new puzzle toys and see how it’ll react. If it doesn’t really like toys, use other means to get its interest. Most importantly, try to spend some one-on-one time with your pal, while you still can!

But the best way to prevent the worst effects of cognitive dysfunction would be to identify it on time. At that point, implementing certain supplements and dietary changes may even bear fruit. Ask your vet if your dog’s bloodwork shows that its diet lacks something and make up for it. In the meantime, feel free to give your dogs healthy snacks like apple slices and carrot sticks — it can’t hurt!

How Can I Tell If My Dog Is Dying?

If all this information leaves you wondering about whether your dog’s time is drawing near, that’s understandable. After all, some of the symptoms of CD can also signify that the dog in question is preparing for the inevitable. However, there are other signs that could indicate that, such as:

Now, let’s add to that list some of the symptoms of CD that overlap with the signs that a dog is dying. If the dog is also being particularly lethargic, uncoordinated, and is experiencing incontinence and personality shifts, it may be expecting to die. Of course, some dogs also exhibit those symptoms while having completely treatable and even curable conditions. So, as always, it’s best to go to the vet before freaking out.

Should I Worry About Pacing Back And Forth In My Older Dog?

Ultimately, as frightening as it was to notice pacing back and forth in my older dog, it wasn’t as scary as finding out the potential causes of the behavior. Still, as we have learned, there are steps all dog owners can take if they notice their beloved pets doing the same thing.