When it comes to coffee, some would say that I’m a real addict. I love having a warm cup of Joe in the morning and two additional cups during the day, carefully spread out so that I could stay productive until nightfall. But what I’ve noticed during my years as a dog parent is that strangely enough, some pups are eager to get their caffeine fix too!

Why does my dog like coffee? That isn’t a question I have a clear answer to. I know that, for me, it all comes down to the scent and that richness I can feel on my tongue after each sip. However, when it comes to dogs, the reasoning behind them diving into our cups from time to time isn’t so sophisticated.

Now, although we’d like to think that dogs could become coffee connoisseurs any day now, the truth is much simpler than you may think. It all comes down to their taste and smell buds — or rather, the lack or the abundance of them.

Unlike humans, who have a refined sense of taste, giving them an advantage over some species, dogs cannot honestly know what kind of coffee they like. They have four main taste classifications; they can identify if something is sweet, bitter, salty, or sour. However, they aren’t able to know the difference between the various kinds of coffee we humans love to drink. Unlike us, who have about 9,000 taste buds, canines have around 1,700!

On the other hand, despite their taste buds not having much of a range, dogs can smell a lot more than we can. Their sense of smell is up to a million times better than ours (dogs have about 125 million sensory glands in their noses), so they can easily recognize which foods or drinks may taste nice based on smell alone. To that end, they prefer stronger scents and more aromatic food. That is yet another reason some of them prefer canned goods over kibble!

So why does my dog like coffee so much? Well, essentially, coffee is rather aromatic, although its taste is often bitter. Better yet, it has a strong scent, which could attract certain dogs and entice them to try it. Their noses tell them whether something will taste well. Sometimes, they won’t like how it tastes, but that’s somewhat rare; their sense of smell is light years ahead of ours and practically faultless.

When I first caught one of my pups taking huge gulps from my coffee mug, I have to admit that I was somewhat amused. Clearly, there’s rarely anything as funny as dogs propping themselves up on their legs and reaching for human food or drink.

However, as it kept happening, I began to wonder whether this wonderful beverage could actually have the same effect on the dog as it had on me. More importantly, could it harm it somehow?

Unfortunately, even though it was pretty funny, I had to put an end to my dog’s love of coffee. As it turns out, it’s toxic to dogs and could lead to a ton of health-related issues and even death. 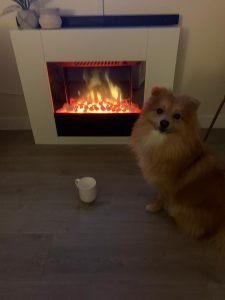 The Effects Coffee Could Have on Your Dog

In general, coffee has the same effect on canines as it does on us; it makes their hearts race and leads to jitters. Most commonly, the effects are evident after 30 minutes to an hour after drinking the coffee.

Nevertheless, we are not the same species and cannot react to things in the same way.  Because of that, caffeine is extremely toxic for dogs, especially when taken in copious amounts. The pup could die if it drinks enough coffee to harm its system. In most cases, that equals 150 mg per 2.2 pounds of its weight.

Now, if the dog takes a sip of your morning coffee, it’s unlikely anything will happen to it. A few sips here and there shouldn’t harm it, though I definitely don’t encourage testing that theory.

But if Fido decides today’s the day he gets his morning boost, watch out for signs of caffeine poisoning. In general, clinical signs of caffeine toxicity occur about half an hour to an hour after ingestion. That’s when some, if not all, of these symptoms, become evident:

Depending on how big the dog is and the amount it has consumed, the symptoms can be mild or severe. Sometimes, the dog may take it rather well, and the symptoms will go away after about six hours. However, when taken in greater amounts, caffeine could kill dogs, as it may generate an extremely rapid heartbeat.

If your dog has taken a sip or two of your coffee, you may not have to worry about it too much. Just keep the cup away from it at all times and avoid future slip-ups.

Still, if you weren’t so lucky and Fido has drunk a full cup or even more, call the vet right away. The veterinarian will have to induce vomiting so as to prevent absorption. If that’s impossible, they’ll have to give it intravenous fluids and medications. These should flush the coffee out and alleviate the symptoms.

In severe cases, the dog may be hospitalized and sedated until the symptoms go away. The effects should be completely gone after 24 to 48 hours, depending on the amount that the dog has drunk.

So why does my dog like coffee? In essence, it all comes down to the aroma coffee has and how it entices the dog due to its incredible sense of smell. Whizzing through their noses and grazing their receptors, the strength of the scent is what attracts most dogs and why they often forget that their owners may not be too happy once they see an empty mug.

However, even though some of my dogs do like a nice brew, I mustn’t let them indulge at all. Even the smallest amounts could trigger various life-threatening symptoms, depending on the size of the dog and the strength.

To stay on the safe side, it’s best to avoid giving caffeine to dogs entirely, especially if it’s in some other snacks, such as chocolate. Chocolate in and of itself is poisonous to dogs, and you can bet that a combination of the two will endanger a pup’s life!

One Year Old Dog Still Peeing in the House. Why?

Dogs tongue sticking out when mouth closed. What Are The Reasons 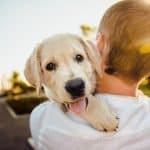