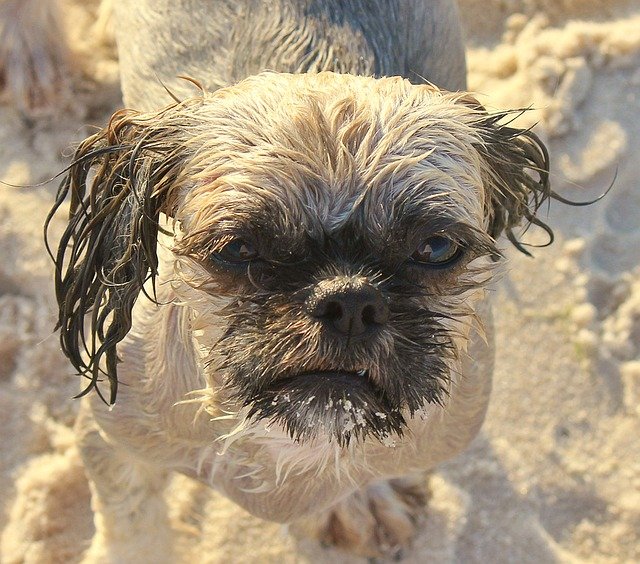 The Shih Tzu is far from a water breed, and you certainly won’t find them dragging drowning victims to shore! This toy breed is not a fan of water, although, with the proper introduction, it is not unknown to see a Shih Tzu paddling away.

Chinese tapestries from two thousand years ago first depict the Shih Tzu, although where this breed came from exactly is still a bit of a mystery! The Shih Tzu was often gifted to Chinese emperors as temple gifts by Tibetan monks who treasured them.

The Shih Tzu’s name derives from “Shih-Tzu Kou,” which translates to mean “lion dog” – a name that aptly describes the facial features of this royal dog and that links the breed to Buddhist lore. So prized was the little lion dog as a royal guardian that anyone caught with one risked execution.

The Shih Tzu is a guardian breed that long served as a companion for royals. Since the focus was on appearance when developing this breed, the Shih Tzu is much less suited to physical activities like swimming.

The Shih Tzu’s coat should have a sturdy topcoat and a protective undercoat that does not mat; however, over the years, this durable coat has remained dense but has become more prone to tangling and does not flow like it should (think of the Maltese coat.) Breeders continually struggle to regain the texture of the older Shih Tzu coat for a more desirable dog.

The long double coat combined with the small frame of the Shih Tzu can make it difficult for this small dog to swim through the water smoothly. If you have ever seen this little pup swim, you will know that these pups turn into mops of hair when they hit the water!

The length and amount of hair isn’t the only problem for the Shih Tzu when it comes to water! After one short swimming session, it can take days for the Shih Tzu coat to fully dry – imagine smelling like a wet dog for days! Not to mention how uncomfortable it must be!

Another obstacle for the Shih Tzu when it comes to swimming is the shape of their skull.

Shih Tzus are a brachycephalic breed. Brachycephalic translates to “short-headed” which means that a dog has a flatter skull shape with a short muzzle.

Brachycephalic breeds have not always had such short muzzles, many brachycephalic dogs look drastically different today compared to how they looked when originally bred!

Brachycephalic breeds are dogs that were bred to hunt, and people once believed that creating a dog with a flatter muzzle increased their jaw strength and made them better at hunting. Eventually, selective breeding led many of these dogs to have the severely malformed muzzles they have today.

Why Is Brachycephaly A Problem?

Brachycephalic dogs have a much shorter muzzle, and the structure of the face and skull make it harder for these dogs to draw air into the lungs. The compact airways of these breeds mean that less oxygen gets to the lungs, and this causes wheezing, snorting, difficulty breathing, and gurgling.

Additionally, a dog’s air conditioning system is their mouth – as they pant, saliva on the tongue evaporates and cools the body. Dogs with a shorter muzzle and more difficult time taking air in are less efficient at cooling themselves when temperatures skyrocket in warmer months!

Swimming is anatomically difficult for brachycephalic dogs – once they get in the water, they have to tilt their head back to breathe. And, if a dog is swimming in hot weather, swimming becomes even more challenging as the dog’s air conditioner is less efficient at cooling down the body.

Teaching Your Shih Tzu To Swim

While most Shih Tzus generally do not care for the water, it is still a good idea to teach your dog to swim for their safety.

Before teaching your Shih Tzu to swim, invest in a lifejacket that fits snugly but not too tightly. Not all dogs can instinctively swim, so it is better to always have a life jacket on your dog.

Also, invest in a pool ramp that will make it easy for your dog to get out of the pool if they are tired or if they accidentally fall into the water.

As you begin to introduce your Shih Tzu to the water, do so gradually and don’t force them to get in if they aren’t ready. Let your pup investigate the water at their own pace.

If your dog does want to try swimming, stay in the water with them and guide them while keeping them in the shallow water.

The Shih Tzu does not have a natural draw to water like some breeds, in fact, most Shih Tzu’s will run the other way at the sight of a pool. This doesn’t mean that it is impossible to get this little dog to swim, though, it just requires a gentle and gradual introduction to water early in life and a lot of positive reinforcement. 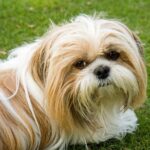 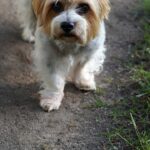