How Much Sleep Does A Golden Retriever Need?

A golden retriever sleeps an average of 10 to 14 hours a day, but a dog’s breed does not dictate their slumber time so much as their age, overall health, activity level, and perhaps size.

Just like humans, dogs require more or less sleep depending on their age.

Health also has a significant impact on the amount of sleep a dog needs.

Have you ever run a marathon and spent the next day sleeping? Our dogs experience that same feeling. There are two reasons for this tiredness –

You can see this type of “crash” if you take your dog to doggy daycare – they will sleep for a full day following as they recharge.

That said, researchers also suggest that working breeds – dogs with “jobs” – sleep less than dogs without jobs. Suggesting that dogs without jobs often sleep out of boredom and dogs with jobs are often “geared up” and ready for action out of routine.

How do we reconcile these two viewpoints? It is most likely that the dogs that experience a post-exercise crash are not conditioned for rigorous physical activity or compete in extreme events like the Iditarod. The average working dog is less likely to experience a significant “crash” because of its physical conditioning.

Though a dog’s breed does not necessarily determine how much sleep they need, their size might.

Limited research has shown a link between sleep and metabolism. Specifically, that larger animals need more metabolic energy to function, so they need to sleep more.

Some scientists question this finding, though, and suggest that the correlation is directly related to the encephalization quotient or EQ (the ratio of brain size as it correlates to body size.)

For example, according to one study by Alhaji Saganuwan at the Federal University of Agriculture, the golden retriever has an EQ of 2.8, and the papillon has an EQ of 1.2. These results mean that the golden retriever needs more sleep than the papillon. But his study also claims that the EQ of the Australian Cattle Dog is 2.7, meaning that despite the 4” height difference and 40lb weight difference, these dogs need almost identical amounts of sleep!

Does Your Dog’s Breed Dictate Their Size?

We mentioned earlier that your dog’s size is influenced more by their age, overall health, activity level, and perhaps size – but this does not mean that breed does not play a role. Many of the factors above are directly related to your dog’s breed. For example, golden retrievers are large dogs with high EQs and moderately high energy levels.

It is not so much a dog’s breed as the characteristics and physical qualities that make up a dog that influence sleep.

With limited scientific research into the sleep patterns of dogs and a lot of the information available to us contradicts itself, so there is an obvious need for further study. One late 2020 study, entitled “A functional linear modeling approach to sleep-wake cycles in dogs,” does show promise in setting further canine sleep research into motion.

The study out of North Carolina State University began collecting data on the overall sleep patterns of dogs (including time of day, gender of the dog, and size of the dog) to create a baseline against which we can compare future data. Hopefully, others will expand on this research and settle some of the discrepancies in canine sleep theory soon! 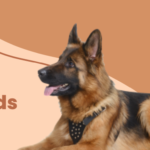 German Shepherd Body Language. What you need to know

German Shepherd Teeth. What You Need To Know, 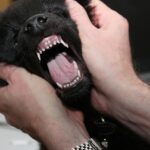